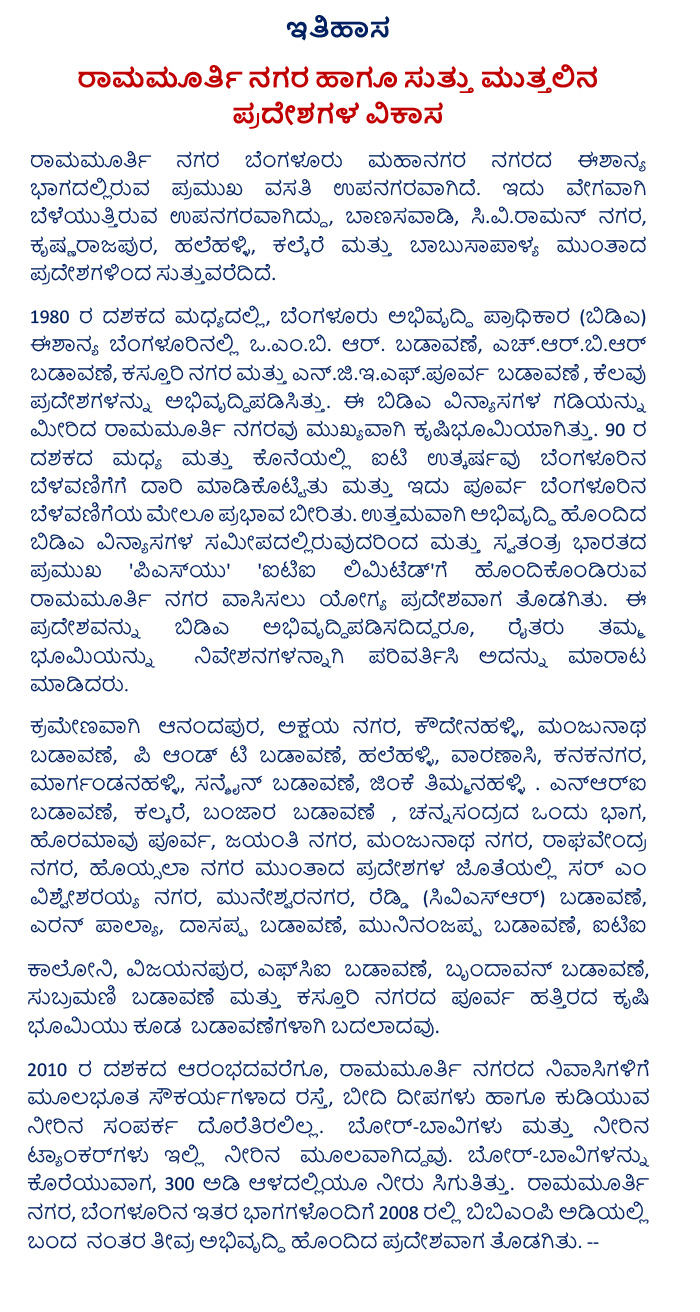 Ramamurthy Nagar is an area located in the north-eastern part of Bangalore Metropolitan City. It is a rapidly growing suburb, surrounded by areas such as Banaswadi, CV Raman Nagar and Krishnarajapura, Halehalli, Kalkere, Babusapalaya. During the mid-1980s, the Bangalore Development Authority (BDA) had developed some of the areas in north-east Bengaluru like OMBR Layout, HRBR Layout, Kasturi Nagar and East of NGEF Layout. The area beyond that was Ramamurthy Nagar, which was mainly farmland. In the mid- and late 90s the IT boom paved the way for the growth of Bengaluru and this also influenced the growth of East Bengaluru. In the vicinity of these well planned BDA layouts, Ramamurthy Nagar became a desirable place to live. This area is not developed by the BDA. The farmers converted their farms into layouts and sold the sites to interested buyers which soon became home for the bank employees. Gradually the near farm lands are also converted and divided house plots and the entire extended areas like Anandapura, Akshaya Nagar, Koudanahally, Manjunatha layout, P&T Layout, , Halehalli, Varanasi, Kanakanagar, Margondanahalli, Sunshine layout, JinkeThimmanahally, NRI Layout, Sankalpa Layout, Sunny Layout, Kalkare, Esther enclave layout, Riches layout, Banjara Layout, Part of Channasandra, Horamavu east, Jayanthinagar, Manjunathanagar, Raghavendra Nagar, Hoysalanagaretc in addition to the existing areas like Annappareddy layout M Viswesharayiahnagar, Muneswaranagar, Reddy (CVSR) Layout, Yerannapalaya, Dasappa layout, Muninanjappa Layout, ITI Colony, Vijanapura, FCI Layout, Brindavan Layout, Subramani Layout, and East of Kasthuri Nagar. Until the early 2010s, there were not even many tarred roads or streetlights or water connection. Bore-wells and water tankers were the only source for water. On drilling bore-wells, water was available even at 300 feet depth. This region came under BBMP in 2008 and drastic development took place. 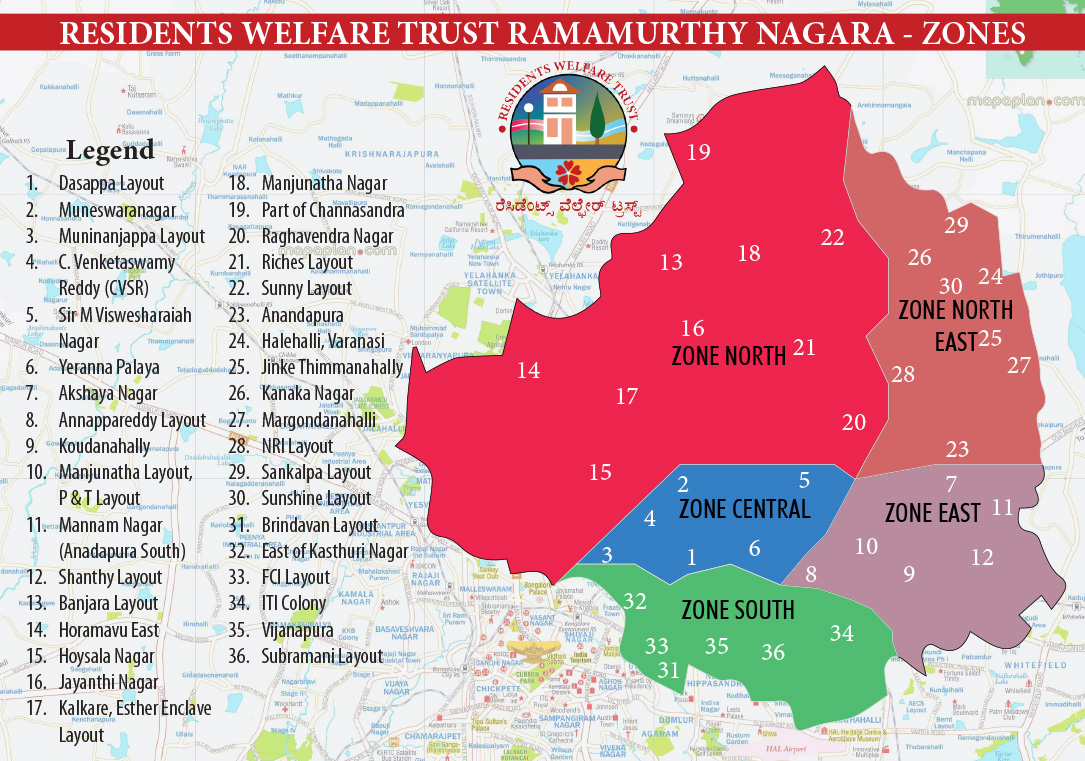 It was a long pending desire of many residents in this locality to have a common platform to associate together and nurture their social and cultural and educational excitements in a free and fair atmosphere, without any discriminations of cast colour or creed and region, religion or relationships.

Sri AV Shama Rao, a veteran social worker, a retired official of M/s ITI Ltd initiated to originate a movement to establish a Non-Governmental Organization (NGO) in the name and style as the Residents Welfare Trust Ramamurthy Nagar. On 17th day of October 2020, in a meeting of seven members presided by Sri. K. Krishna Murthy in the capacity as the president of the ad-hoc Committee decided to register the NGO under Indian Trust Act. The Trust deed prepared by the Working President, Sri SK Nair has been approved after detailed discussion. The founder Trustees Sri. AV Shama Rao, K. Krishna Murthy, Sri. SK Nair, Sri Mune Gowda M, Sri Divakaran P, Smt. Nagajyothi KS and Dr. Keshavakumar JS were there in the meeting. Accordingly the Trust was registered under Indian Trust Act on 26th October 2020 and immediately inducted another 14 Trustees making the Board of trustees as 21 trustees as per the Trust deed. Further the working area spread over fromHalehally to Banjara Layout and from Kalkere to Vijanapura, has been dived in to five Zones. Each Zone will have Zonal Chairman with independent charges, assisted by Zonal Conveners and Street/Layout-wise Liaison Officers. With this Organizational Set-up we will be able to establish link with each and every families of this area providing strength and support to the deserving fellow human beings. 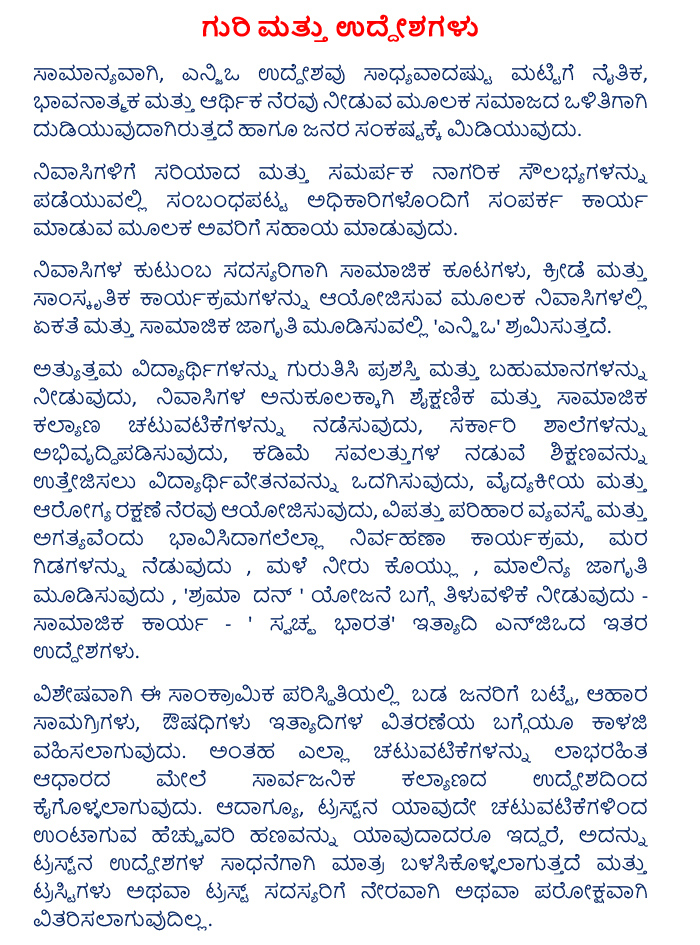 In general the objective of the NGO is to wipeout the tears of the fellow human beings by providing moral, emotional and financial assistance to maximum possible extent. Helping them by doing a liaison work,with the Civic authorities in getting proper and eligible civic amenities to the residents. Creating Unity and Social Awareness among the residents by organizing Social Gatherings, sports & cultural events etc for the family members of the residents.

All such activities will be carried out with motive of public welfare with non-profitable basis. However, surplus funds if any arising out of any of the activities of the Trust will be utilised solely for the attainment of objectives of the Trust and will not be distributed either directly or indirectly to the Trustees or Trust members.