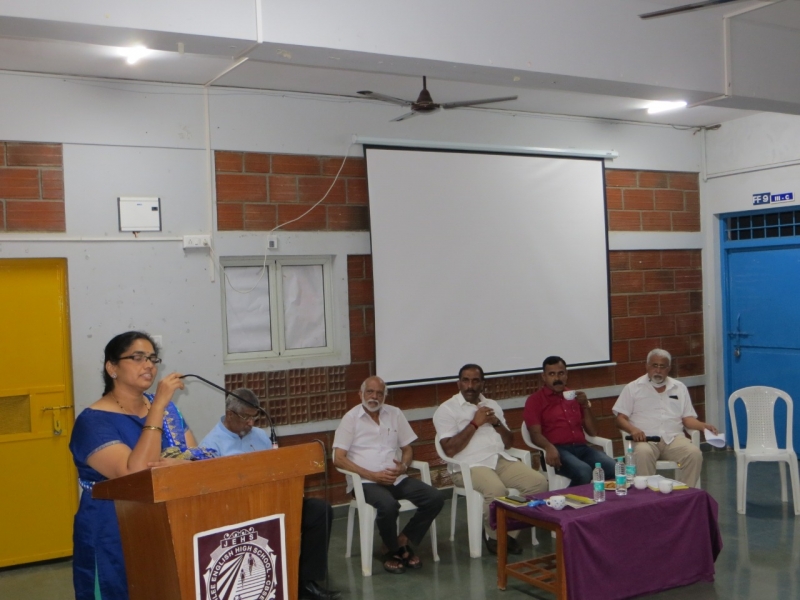 The General Council meeting of this NGO – Residents Welfare Trust Ramamurthy Nagar was held on Sunday the 21st February 2021 at Jubilee English School, NRI Layout, and Ramamurthy Nagar. Director Board members and about 55 leaders of five different Zones (area spread over at Margondanahally to Channasandra and Kalkere to Vijanapura) were actively participated.

The meeting discussed in detail about the future activities of the NGO   all along. Also the members expressed their grievances and remedies about the civic issues of the area. It has been decided to conduct frequent Zonal Meetings of the leaders and consolidate their issues to present it to the Joint Commissioner BBMP for remedial actions. It was also proposed to organize a ‘Janaspandana’ programme to interact the residents with the concerned authorities directly in the presence of the MLA/Minister.

Founder Sri AV Shama Rao addressed the participants through a Zoom Call as he was not able to attend the meeting personally due to his ill health. Sri SK Nair Working President detailed the agenda of the meeting.

Sri Peter George the Director for Educational activities of the NGO and the President of the Host institution Jubilee English School NRI Layout welcomed the gathering.

The Meeting honored and introduced the General Secretary, DKSES Secretary and Joint Secretary of the host institution Jubilee English School., all Five Zonal Chairmen & Team members, of the NGO.

The sponsor of NERALU Website Ms. Shahista Ismail - Director FloMont World School – Varanasi Road, Rama Murthy Nagar has been honored and she addressed the gathering and explained the necessity of such NGO’s for our society.

President Sri K. Krishna Murthy, released the Hand book and issued the first copy to Sri Peter George. Mr. Krishna Murthy did his presidential address and explained about the activities of the NGO. Ms. Sindhu Jonathan Director, detailed the efforts taken for getting things done by the Civic Authorities through the Civic Grievance Cell. Mr. Ajee PB, the Director of NGO presented the Objective’s and future activities of the organization. He while concluding his address sung a beautiful Kannada song which was much applauded by the audience

Dr. Keshava Kumar, Treasurer presented the financial report of the NGO and requested all the leaders and well-wishers to take the membership of the trust, which will make them eligible to become the mainstream leaders of the trust in future.  General Secretary Ms. Naga Jyothi KS explained about the formation, projects and activities to undertake soon by the NGO.

Mr. Abhilash Nair Director of the NGO addressed the gathering and presented a worth full message of making customized domestic composter for each home which will help to utilize the wet garbage as manure for the plants. While concluding its implementation procedure, it has been proposed to conduct a workshop for the benefit of the residents.Ms. Bharathi Rajesh the Zonal Convener North East Zone in her address proposed to have women entrepreneurship program for ther NGO for various vocational and educational programs. General Secretary assured that it can be discussed in a meeting of the women members of our NGO